I absolutely LOVE these chalkboard markers. In the past I have always used regular chalk that is super messy and hard to hold. I’m so incredibly happy with the way my chalkboard sign came out.

Make Your Art Stand Out

Chalk markers in dazzling neons and designed with a 3mm reversible nib can only mean one thing: endless art fun! Kid-safe, non-toxic, easy-to-clean, and environment-friendly, this set of 10 liquid chalk pens is the ideal art supply to unleash your creativity on chalkboards and just about any non-porous surface you can think of. Add pops of color to any business board, art project, signage, window, classroom, and everywhere else–and see how much your artwork stands out! The Ultimate Freedom of Expression

The chalkboard ink pen is washable and will work on almost any surface! Will erase off non-porous surfaces; such as blackboard (wet erase), glass & mirrors (dry erase) and Permanent on porous surfaces.

These erasable chalk pens are water based, dustless, wet wipe, non-toxic formula safe for use at home. Time to replace the old dusty chalk with chalkboard markers. 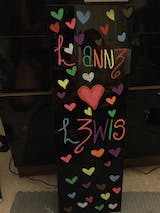 A
A.I.M.
Beautiful vibrant colours as well as practical shades with these chalk-effect markers. Work beaut...

Wow, these are fantastic markers, they write beautifully and the colours are the nicest I have seen for wipeboard/chalkboard use. I intend using them at Christmas to decorate my windows.These Chalkola markers can't be used straight out of the packet, each marker has to be 'primed' by pressing repeatedly on the tip. To start with the tip of the marker is yellow, as shown in the marker on the right in my photograph.After pressing repeatedly on the tip for some 30 seconds the ink starts to flow out of the marker and quickly works down to the end of the tip. When you shake the marker you can feel and hear a ballbearing (or something similar) rattle within the body of the marker. This took me back to the felt markers I had as a child in the Seventies, which also rattled when shaken. I experimented and shaking the marker seemed to make no difference to the speed at which the ink first appeared on the tip.The bullet tip has quite a fine point, so it's easy to draw with precision (see photo). The colours are lovely - they do have a slightly chalky, textured appearance when dry (again, see photo).I used the markers on a small wipe-board that I use for classroom and video teaching, as shown in the photo. I was able to instantly remove the ink afterwards with a dry cloth, and a wet wipe disposed of all residues very quickly.The markers are odour - free and very pleasant to use.The only criticism I would have is that the coloured caps can't be fitted on to the end of each marker. This is ok if you are in a classroom with a wipeboard tray, and the caps do have a mock clip to prevent them from rolling, but otherwise you are looking for somewhere safe to put the cap when working with the markers.Apart from that little criticism, which isn't worth docking a star for, I would wholeheartedly recommend these markers. Neons seem to be colours that capture the attention of a lot of children, and the neons in this set are nicely bright. Not all of the colours are novelty, the red, black and green are straightforward shades.I received a sample of these lovely markers to remove without cost, but this is my honest and unbiased opinion..

I received these markers as a gift a few days ago and I love them!The packaging was professional and when i opened them it was a joy to see how well they were presented. The pack contains a collection of 10 chalk based markers to be used on none porous surfaces. you can use them on mirrors, glass, windows, plastic, metal, tiles the list goes on.This is a great product for anyone who is creative and artsy! I personally have been using them to leave creative and helpful messages to myself throughout the mirrors in the house. I am a professional illustrator for children's books so i work from home and often to make sure i get tasks done i have to make lists, for a long while I've been in desperate need of a big white board or something that i could use to give myself important reminders on. but the thing that's put me off getting one is the pens always seem to stain if you leave the ink on too long. not the case with this product! I can write what ever i need to on my big bedroom mirror ready for me to read when i start the day and at the end of the day even when the ink is dry it wipes straight off all that is needed is a wet tissue, paper towel or cloth. buff if off with a dry cloth and then the mirror or surface is perfect good as new! also the ink washes straight off the cloth you used.This would also be perfect for children to use and play with, everyone knows kids like to get messy and being able to draw on windows and mirrors is a fun idea for kids to get involved with, ho harm done just a simple wipe and all the ink is gone! great product! will buy again :D

E
E.
I was pleasantly surprised how good this product is

As an illustrator I'm always keen to try new products available on the market. I was pleasantly surprised how good this product is. The packaging is very nice and the descriptions on it is spot on. The markers feel good in the hand, they are not heavy and have a good grip. I was very surprised that after shaking the pen and pushing the tip of the marker the ink starts to flow instantly and is like a bright paint, something I didn't expect from the chalk markers!!! They are not messy /dry very fast/and you can easily correct any mistakes using a damp cloth. Is a versatile product and can be used on non porous surfaces, I even drew on my favourite coffee mug and it looks great. Is odour free which is very important especially when you have a complex drawing and you have to spend hours using the paint. It could be an excellent present for a child or an adult, I highly recommend this product, great buy, great fun, you won't be disappointed !!!!! 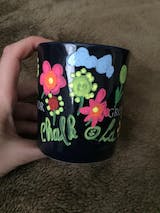