So many colors, and good size tubes.

I just started painting and its nice to have a wide variety of colors so that I have more colors that I want, and its easier to mix, to get any color I'm missing. The paint spread and mixed nice, and didn't dry out to quickly. Whether you’re new to acrylic painting or a seasoned artist - Great for creative adults, teens and children.

Packed in a Sturdy Box

Great for gifting and keeping your acrylic paints organized and accessible. Individually labeled Aluminum tubes allow you to easily squeeze out all the paint.

If for any reason, you're not completely satisfied with our acrylic paint supplies, simply contact us for a refund or replacement.

It was more than I expected! Loving the choice of colors and the box is heavy enough to store them! Great value and vivid colors. Good buy.

Love this set! The colors are super vibrant, and they are very easy to blend. I'm a beginner and these were very beginner friendly. 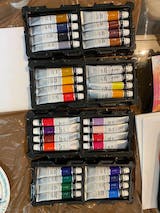 Gorgeous colors. Very happy with the product and the price. Great value. My painting proves it.

R
Resticon
Tubes are a bit small and the paint a bit thin, but these are good mixing paints with tons of colors

The selection of paints provided with this kit is pretty thorough, even providing 2 tubes of Titanium White and Mars Black so that you will have plenty for mixing and painting with. The tubes do come organized, though not in a way that I am particularly fond of, as it is based on opacity and lightfastness rather than by color. After a bit of reorganizing, I have them more like a traditional color wheel so that I can locate the colors easier when I need them. Once I could see all the colors clearly, I noticed that there were tons of shades and tints for all the colors. Purple was the least plentiful color in the set and even then there are still 4 of them to choose from. Thankfully the 22mL tubes, while a bit small, still provide plenty of capacity for mixing to get whatever color you need. Burnt Sienna and Umber, Carmine Red, Prussian and Ultramarine Blue, even Payne's Gray are all included in this set. I do recommend that you buy larger individual tubes of the more common paints though as these 22mL tubes are quite small and are better for mixing than for painting heavily with one color on a larger canvas. The price is comparable to about 75 cents an oz which is about average as a 4oz bottle of one color will typically run about $3. The difference is just that you get 64 small tubes here as opposed to 12 large tubes. The paints themselves are water-based and easy to wash. They do seem a little thin and watery compared to other acrylics I've used and that is another reason I recommend using them for mixing and painting small areas rather than painting as a base coat or large areas in your work. They will mix easier and can be applied in layers to get just the right color, but they will run out quickly if you try to spread one of them over too large a surface. 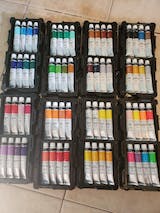 A
Alison G
So many colors!

Great selection for the price. Took an old beat up clay pot from my garden to test them out and they have great coverage. Only problem is there is way too many colors to decide which to use! Lol. There are tons of shades, an entire container of Metallica, and an entire container of neon. Only downside is they aren’t sealed so I hope I can use them all before they start to dry out. I would definitely buy again. Two thumbs up!! 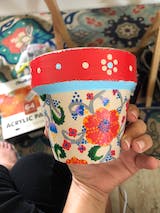